My blood-related father left my mother and me at two-years-old and I grew up never having known him or what I ethnically am. Several years passed and I kept mentioning wanting to do an AncestryDNA kit and for Christmas 2020, my wife Lady Samantha brought me a kit. I immediately completed the kit and mailed it in and we’d waited… TODAY… my results finally came in and there were some large shocks there.

I immediately got the butterfly feeling in the pit of my stomach, a combination of excitement and nervousness filled me, as soon as I saw that my results were ready. 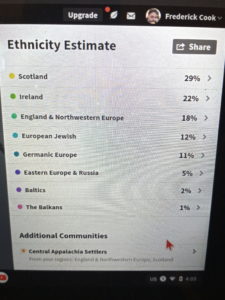 The above image is the results of my DNA test and immediately I was told to disregard anything under 5% from all sources I’d read and watched via youtube. There were a few very shocking parts to my ethnicity (at least to me anyway) that I was not expecting. When I say “Exciting AncetryDNA finds,” I truly meant it!

Growing up I was told I am German, English, and maybe a bit of Irish… no mention of Scottish, Jewish, or Russian. My predominant ethnicity is Scottish… which was the first shocking revelation. Secondly, I am Irish, Scottish, and Irish make up over half of my total ethnicity in my DNA…just WOW!

English was not shocking, but European (Ashkenazi) Jewish definitely was a shock. I have no family members who are practicing the Jewish faith, nor anyone who has ever mentioned this to me, so I assume it was on my father’s side of the family. This gives me something to study more and look into more deeply, as I want to know about all sides of who I am.

German is well documented in my family, my great grandmother was off the boat… but Russian?!?!? I had no idea and although it isn’t a large part of my ethnic makeup, it is something I want to know more about. This is all a lot to process and trust me I am still processing it as I type this out.

I am getting to know…me!