Fear is a powerful thing, the fear of change (especially) will often lead one to irrationally clinging to whatever was, rejecting change entirely. Cognitive dissonance, Stockholm syndrome, and a whole list of mental conditions can be attributed to fear. People will fight, kill, and die to try to stop things from changing, even if it ultimately benefits them and their loved ones.

Fearing change is futile because if there is one thing you can expect in life, is that change is constant. Fearing change is also detrimental because when demographics change (and they always do), this can lead to racism, bigotry, hatred, violence, and nationalism. Homophobia, transphobia, xenophobia, etcetera are also the byproduct of fearing change. 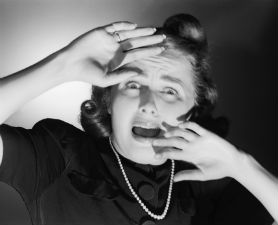 The world truly opens up when we learn to accept change as an inevitability which we cannot and should not try to stop. Fearing change and trying to work against it, will only make one miserable and it will keep them from enjoying life. Societies around the world are moving towards greater acceptance of individuals and their choices, but still, others attempt to push against it.

Change for better or worse will occur and you can either ride the wave and accept it or be swept into the undercurrent and struggle against it.

It is the fear of change that keeps the status quo, it feeds it, fights against it, tells people that if there’s change, there’s a calamity. A good example of this is the United States’ two-party system, whereas every election cycle good people vote for the lesser of two evils instead of the best-suited candidate. Third parties have next to no say, no debate time, and are utterly shut out, this is because of the status quo, and the people voting fear change.

After an election, you’ll often hear, “I voted for them, they weren’t a good candidate, but they’re better than [insert other candidates].” This is what fearing change gets you…more of the same ole’ thing!

This is why systems of governance hardly ever change, this is why it won’t change…because to allow things to truly change, it has to begin within each of us individually. We must change to allow and accept the change to happen that will benefit each and every one of us and you’ll see, the “same ole'” will attempt to fight against it. Whenever a change is on the horizon the status quo will always attempt to demonize it, infantize it, and treat it as if it will be the end of the world as we know it.

“The definition of insanity is doing the same thing over and over again and expecting different results. – unknown”

Knowing this, and I am sure you already know this, fear is the enemy, not change. Change is a requirement to progress, stepping out from your comfort zone is the only way to genuinely grow. Ben Francia said it best, “Great Things Never Came From Comfort Zones.”

It’s for this reason, that I write what I write here and express things that I know will garner some ridicule from the status quo and those afraid of change. The alternative to not accepting change is just more of the same ole’ human suffering, and I will not sit idly by and accept that!