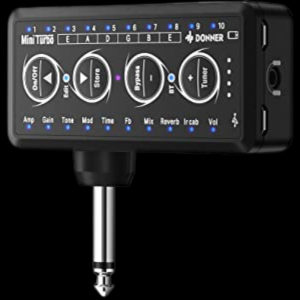 So, here was the problem I had… I have four kids and wanted to rock out, my youngest two are in bed by 8pm, so my Cajon was out of the question for nighttime playing. For my electronic drums, I can put headphones on and jam and I wondered if they made something that I could use on a guitar and bass guitar with headphones that were compact, had effects, and took headphones… I found the Donner mini turbo headphone amplifier!

Immediately this thing checked off all of the bells and whistles on Amazon which read;

The big question for me was, is this thing any good and if so, could it replace the need for an expensive amplifier? In all, I’d say yes and no… but more on that in a minute!

10 amps, 10 heads, 10 effects, Bluetooth, tuner, can record through it onto PC or the phone, comes with a charging cable, a connection USB to micro USB cable, and one of those little pointy audio cables (sorry to get so technical), with a larger adapter. I first looked through the instructions, but couldn’t find the magnifying glass… so I took to youtube to find a video on using it and soon found it was a highly-rated product originally by a company called “Lakato.” I trust Donner, it has a recognizable name in the world of affordable instruments, Lakato… wtf is that, am I right?

I got the functions down and tried it with my headphones and it worked flawlessly… then I looked over at my badass high-powered mini speaker on my desk… would it work on that so that Fred could shred and have friends bob their heads… YES!

I plugged the pointy audio cable into the device and the other end into my speaker and boom, I was shaking glasses and moving asses in no time, and all for $45. Now onto the drawbacks of the Donner mini turbo headphone amplifier… for one, the device spins around in the guitar port and you’ll need to turn it around to change things on it when it’s plugged in. That one isn’t all that bad of a drawback, but can it wholly replace an amplifier with pedals and effects… somewhat.

You can’t change effects on the fly like you can with physical effects pedals, not without cycling through the effects presets, again this is not a terrible drawback to the device, especially for beginners. One thing I didn’t expect is how long the battery lasts, which easily holds up for around five hours and takes maybe an hour to fully charge, impressive. The device operates fairly easily and you can edit any presets with more reverb, gain, feedback etc… which is very cool.

I was not expecting such a big thing from such a small package (that’s what she said), but the Donner mini turbo headphone amplifier delivers on its promises and wails. I will give this little bad boy; 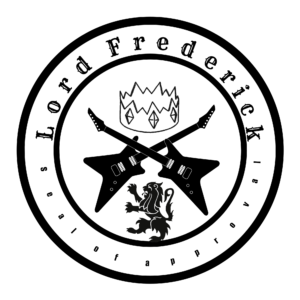 …and you can buy your own here… again I make $0 if you buy it, and I brought this with my own money.