Article I – Declaration of sovereignty

There comes a time when politics, morality, philosophy, and spirituality contradict one
another and the individual must decide for themselves the course by which to correct it
or live as a hypocrite. I have wrestled with this for decades, fighting against everything I
am and everything I believe as a human being to be right and true. My conscience
would not see me a hypocrite, nor would it see me be rid of aspects of myself I hold as
dear and pure.

This is where the idea to formulate a new nation was born, a nation that gave rise to
true freedom and equality for all human beings. Newfredland was formed, first in my
heart, then in my mind, now by my pen and my keyboard.

Not founded on slavery, blood, conquest, or war, not surviving to see profits or to lessen
the status of the many to elevate the few. Newfredland is truly a nation born of necessity
to honor the spirit of each citizen and to give respect and dignity to all. Modern society,
governments, and culture are wholly devoid of those aspects, and it is our sincerest
desire to remedy this.

Today, humans are overworked, overtaxed, overstressed, mentally, and physically ill,
under-educated. Governments are all at war with others, spending your tax money to kill
innocents and sending your children and family to die or be maimed. Newfredland has
no taxes, no war, no standing military, and no desire for any of that.

Therefore, within the course of rectifying my own grievances with society, culture, and
government, in full understanding that these things will not change, I have founded and
hereby fully declare the sovereign nation of Newfredland to be. Free of intervention from
foreign bodies, or that of outside influence or coercion. As stated in the Declaration of
Independence, which was passed by the Continental Congress in 1776 which affirms “That whenever any Form(sic) of Government becomes destructive of these ends, it is
the Right of the People to alter or to abolish it, and to institute new Government…” this is our right! 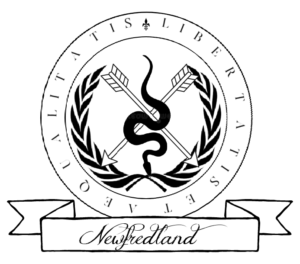