I began taking martial arts lessons at age ten, but even before that, I knew what I wanted to do and be in life. I began by falling in love with martial arts in movies at around age five, the Karate Kid, Rocky, Bloodsport, and a ton of Chinese martial arts classics (Especially Shaw Brothers). This led me to get books from my first grade RIF program (Karate Beginner to black belt by Bruce Tegner and Nunchaku: Karate Weapon of self-defense by Fumio Demura) and practice daily on my own.

There is only so much you can learn from a book, so at ten I was formally enrolled in martial arts classes. By age thirteen I held my first black belt in Northern Shaolin Kung Fu and was regularly competing in Tae Kwon Do tournaments (PA State champion 1992-1993 free -fighting, routinely placed top three in Poomse). It was around this time I read a book that changed my life, The Tao of Jeet Kune Do by Bruce Lee and I set about to begin on that journey to learning, taking what was useful and disregarding what I didn’t feel was useful.

I still loved Kata/Poomse and found it as useful if not more so than shadow boxing. I had a small school in Philadelphia from 1999 through 2001 and near the end of 2001, I moved to Tucson Arizona where I fought Amateur Vale Tudo for several years. I had a martial arts school in Arizona from 2001 through 2009 (T-Town Tigers Fight Club).

At the very end of 2009 I moved to Gastonia, NC and a few years later moved back to my hometown of Philadelphia, Pennsylvania. During my time in NC and being back in PA, I stopped teaching to focus more on my own training and getting in shape. 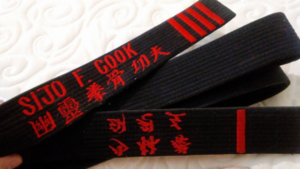