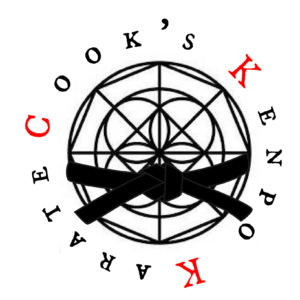 I’d begun developing my own martial art out of necessity to express myself and to combine elements from the numerous arts I’d studied over the decades. Since age 18 I realized that I didn’t have enough time to study every art individually and so I would study them individually inasmuch as to ascertain a high level of proficiency and then add their elements that I liked to my own practices. The art underwent numerous changes over the years and its history is a rather storied one from its beginnings to now.

Literally, the system went from mostly kung fu (Seven-star kung fu) to a fusion of kung fu and Karate, but retaining the aesthetics of kung fu (Ghost fist kung fu) To Karate with some elements of kung fu (Renketsu-te Karate-Do) and a fusion of kung fu, Kenpo and Karate (Cook’s Kenpo Karate). If something proved to work it was kept, if it didn’t it was discarded, not unlike what Bruce Lee mentions in his work “The Tao of Jeet Kune Do,” (which was a huge inspiration).

Over those incarnations of my system, I’d taught hundreds of students, from Philadelphia to Arizona, In PA, most knew Chat Sing kung fu, in AZ it was Ghost Fist kung fu and now back in Philadelphia, it went through Renketsu-te Karate-Do and the final form, Cook’s Kenpo Karate. In the end, my art encompassed Kenpo and Karate mostly, with some Kung fu theories and techniques.

Anything added to the art will neatly fit into the system as it is, and so I officially submitted my art for review with the International Black Belt Association and was accepted and recognized. 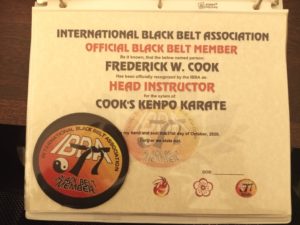 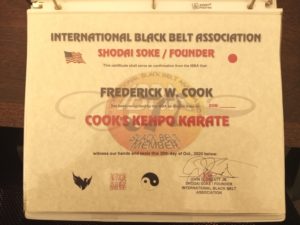 Built from extensive training in numerous Northern Shaolin arts, Tae Kwon Do, Uechi-Ryu Karate-Do, Pangainoon, Parker’s American Kenpo, Kan Shu Kenpo, Monkey fist kung fu, and even Baguazhang… it is as traditional as it is modern. While it is primarily a striking art, it does house elements of takedowns, grappling, and even submissions. It is a full-contact art, built around budo and actual combat, so it is ideal for self-defense, and tournaments.

Cook’s Kenpo Karate has an extensive theory and applications section, which students begin learning from their first class and extends through the entirety of their lessons. Many of the theories come from Kenpo, some come from classical Karate-Do and even a few from Kung Fu. These range from distance, closing the gap, angles, creating openings, trapping, locking, point of origin, multi-step techniques taught through three phases, et cetera.

We also teach the following aspects;

There are three color belts in our system and various degrees of the black belt;

The term “Sensei,” is used for any Black belt 1st through 3rd degree who is a teacher, after that appropriate titles should be used. Students each stripes on their colored belts to denote progress and when three stripes are earned, they may test for their next belt.